Dynamic Senior Living Set Amidst the Wonders of the Southwest 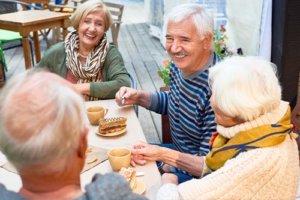 Our native Temple is a city built upon big dreams and even bigger determination. Founded in 1882, the Gulf, Colorado & Santa Fe Railway was integral to Temple’s steady growth, a big part of an era that’s commemorated to this day at our city’s Railroad and Heritage Museum. Years later, Temple was also the birthplace of Baylor Scott & White Health, one of the largest and most prominent healthcare systems of the 20th century.

Fast forward to today and Temple remains unique and desirable to seniors, families, and young professionals who want big-city conveniences, but also the warm, familiar atmosphere of a small town. Our residents and locals enjoy outdoor recreation including boating and fishing on nearby Belton Lake and Stillhouse Hollow Lake. Temple is also home to Sammons Golf Course and the Bloomin’ Temple Festival, which is held each April to herald the arrival of spring and the abundance of Texas’ signature wildflowers including the Texas Bluebonnet.

Our close-knit community comes together over shared interests as well, whether it’s Temple High School sports, or cheering for favorite college and professional teams, which include the Dallas Cowboys, Texas Rangers, and San Antonio Spurs. There’s also the University of Mary Hardin Baylor, whose Crusaders won the NCAA Division III Football Championship in 2018.

From Morada’s central location, it’s fewer than 15 minutes to Bell County Expo Center, which plays host to several, touring artists throughout the year, and is the site of the Bell County PRCA Rodeo, a perennial Fourth of July tradition. Meanwhile, music and performing arts lovers can fuel their passions at stops including the Temple Civic Theater and Temple Symphony Orchestra, both of which are about 10 minutes from our front door.

As you can probably tell, we know our hometown…and for good reason. Morada Temple was actually among the first senior living communities to open in Central Texas, and still owns the distinction as the only community in Temple to offer the Active Independent Living option. So for hometown senior living with all the best of Temple and the surrounding area at your fingertips, the choice is simple: Morada Temple.